Lignite is a low rank, brownish-black coal that produces less than 8,300 British thermal units (Btu) per pound on a moist, mineral-matter-free basis 1. Lignite has a high content of volatile matter which makes it more convertible into gas and liquid petroleum products than the higher ranking coals. However, its high moisture content and susceptibility to spontaneous combustion may cause problems in transportation and storage.

Lignite is typically mined by stripping methods and burned for electric power generation. Arkansas's lignite deposits are suitable for this purpose and were tested as fuel source for power generation. In 1988, a 221,799 ton sample of Arkansas lignite mined in Saline County was successfully test-burned in a local power plant as a blend of up to 20 percent lignite with coal from the western United States. The Arkansas Geological Commission (now the Arkansas Geological Survey) has estimated total lignite resources at approximately 9 billion tons, at depths of less than 150 feet 2. Proven reserves announced by private companies are approximately 2 billion tons 3.

Lignite was mined in south Arkansas by underground methods and used before the Civil War. It was first used for steam-boiler fuel and later as fuel for small locomotives near the mines in Ouachita County. In 1907, two small oil-distilling plants were operating in Ouachita County. The plants produced oils from lignite mined by open pit methods in the Camden field in Ouachita County. In 1913, lignite from the Camden area was yielding up to 38 gallons of oil per ton, although the average oil recovery was about 25 gallons per ton 4. In 1938, a plant was constructed in El Dorado, Union County, to extract Vandyke brown dye as a product of lignite processing, followed in 1943 by production of the dye from a plant at Malvern, in Hot Springs County. The dye was used in staining ammunition boxes their characteristic brown color during World War II. Annual output during the war years was small – about 1,000 tons per year 5. Another company in Malvern extracted Montan wax from lignite for a few years 6. Montan wax is used in some polishes, carbon paper, and insulating materials.

During the 1970's and early 1980's, various companies implemented exploration programs and discovered a number of major lignite deposits in Arkansas. The lignite was examined for use as a boiler fuel for electric-power generation, as a source of chemical feedstock, and as a source of petroleum-type products through gasification and liquefaction. 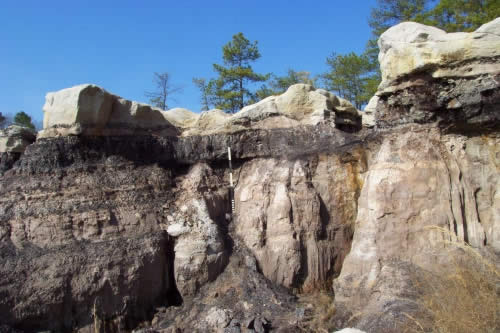 Approximately 2 1/2 feet of Tertiary lignite from the Wilcox Formation is exposed in the highwall of this abandoned clay pit southeast of Malvern, Arkansas. Note that the lignite is the dark colored bed at the top of the Jacob's staff.

Arkansas lignite has an average heat of combustion value of 6932 Btu/1b on a moist, mineral-matter-free basis. This value makes the lignite rank (A) which has a Btu/1b of between 6300 and 8300 1. Lignite is present at shallow depths in sedimentary strata of Eocene age in the West Gulf Coastal Plain region of Arkansas and along Crowley's Ridge in the Mississippi River Alluvial Plain. Potentially economic deposits of lignite occur within certain stratigraphic sections of the Wilcox and Claiborne Groups. No significant lignite deposits are known within the Jackson Group sediments or in Quaternary age sediments.

The resource potential of lignite in the Wilcox is estimated to be about 4.3 billion tons 2.The Wilcox was deposited in a fluvial, non-marine environment. The Claiborne Group is estimated to contain 4.7 billion tons of lignite resource 2. The lignite in the Claiborne Group was deposited in deltaic to near-shore shallow marine environments.

Lignite occurs at shallow depths (less than 300 feet) in sedimentary strata of Eocene age in the West Gulf Coastal Plain and along Crowleyâ€™s Ridge in the Mississippi River Alluvial Plain. These rocks are divided, from oldest to youngest, into the Wilcox, Claiborne and Jackson Groups (Figure 1). These units contain sediments which were deposited in fluvial, deltaic and marine environments. Overlying these Eocene age units in many areas are gravels, sands, silts and clays of Quaternary age.

The Wilcox Group is exposed in outcrops trending southwest from northwestern Lonoke County to northern Miller County and along Crowleyâ€™s Ridge in Craighead, Greeene, and Clay Counties of northeastern Arkansas. The Wilcox is as much as 850 feet thick in Arkansas and has a maximum outcrop width of 21 miles in southern Hot Spring and Dallas Counties. The sediments dip less than 1 degree to the southeast. In the subsurface the Wilcox is found in the Gulf Coastal Plain from Clay County southward to Chicot County and from Chicot westward to southern Miller County.

The group is composed predominantly of fine to very-fine sands, silty sands, and clays. The sands are generally light gray when unweathered. The clays are generally light shades of gray or brown and contain varying amounts of fine sand and silt. The sands and clays frequently contain enough carbonaceous material to make them dark brown to black. Lignite occurs in beds up to 10 feet thick and is generally lenticular in shape. The larger, more important lignite beds appear to be in the lower and middle Wilcox, while thinner beds are scattered throughout. The Wilcox is thought to be deposited in a fluvial environment.

Outcrops of the Claiborne Group occur from eastern Saline to western Miller County and from southern Pulaski southward to western Ashley County. The Claiborne is also exposed in outcrops along the Crowleyâ€™s Ridge in St. Francis, Cross, Poinsett and southern Craighead Counties in northeastern Arkansas. In the subsurface the Claiborne is found from Craighead County southward to Ashley and Chicot Counties, and central Grant County eastward to the Mississippi River. The Claiborne generally dips to southeast at less than 1 degree.

The Claiborne is as much as 1,200 feet thick in Arkansas and consists predominantly of silty clays, fine to very-fine sands, and silts. The clays are light to dark gray, blue-gray and usually very silty or sandy. The sands are medium to dark gray when unweathered and alter to white, brown and red when weathered. The silts are medium to dark gray and clayey. Lignite beds in the Claiborne are lenticular, generally of limited areal extent, with a maximum reported thickness of over 10 feet. The lignite in the Claiborne was deposited in deltaic to near shallow marine environments which affected the areal distribution and the chemistry of the lignite. 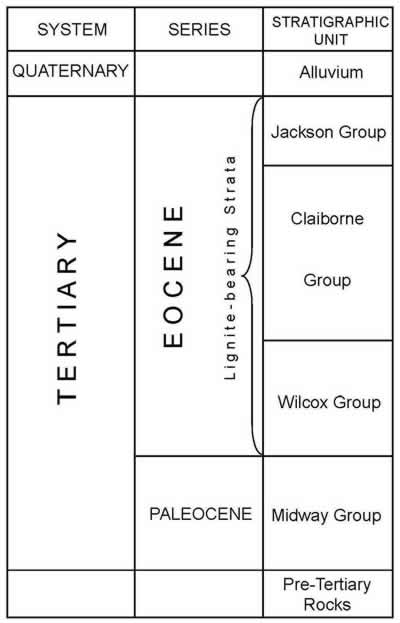 Chemical Analyses of Lignite in Arkansas

During the period of 1975-1985 the Arkansas Geological Commission (now the Arkansas Geological Survey) underwent a lignite project to (1) determine the geographical and geological distribution of lignite in Arkansas at mineable depths and (2) obtain heating values and chemical analyses of lignite. 1,843 test holes were drilled to an average depth of 157 feet for a total of over 290,400 feet. Of this total footage, 246,000 feet were drilled in lignite-bearing units.

Based on 590 drill holes, with an average depth of 161 feet, and 95,000 feet of section drilled, lignite in the Wilcox Group represents 0.93% of all the Wilcox sediments drilled.

Fifty-two (52) lignite samples from the Wilcox Group were collected for chemical analyses. Proximate and ultimate analyses show that on an as-received basis Wilcox lignites average 35.7% moisture, 17.6% ash, 0.57% sulfur and 5,759 Btu/1b. Moisture-free analyses show an average of 27% ash, 0.9% sulfur and 9,004 Btu/1b. On a moisture- and ash-free basis the Wilcox lignites have 1.2% total sulfur, and 12,226 Btu/1b. Total fixed carbon averages 44% with 56% volatile matter. Based on a moist, mineral-matter-free basis Wilcox lignites average 7,100 Btu/1b and are of Lignite A rank.