Floods are among the most powerful forces expressed on the surface of the earth. Societies worldwide have developed along and adjacent to rivers where floods have major impacts. The importance of the role of flooding in shaping our cultural and physical surroundings has led to study of the variety of types of floods, their mechanisms and their magnitudes through time and space. Today, stream flow analyses are taken of many major rivers and streams in Arkansas as part of these on-going studies.

Several types of floods are recognized by their area extent and duration. Flash floods occur in Arkansas due to localized heavy rainfall, especially after periods of gentle soaking precipitation. Large magnitude or regional floods, along major rivers, occur after major long duration rains in the given stream or river watershed. Such flooding may not be due to local rain events at all, but rainfall that fell days or months before in other areas of the watershed. 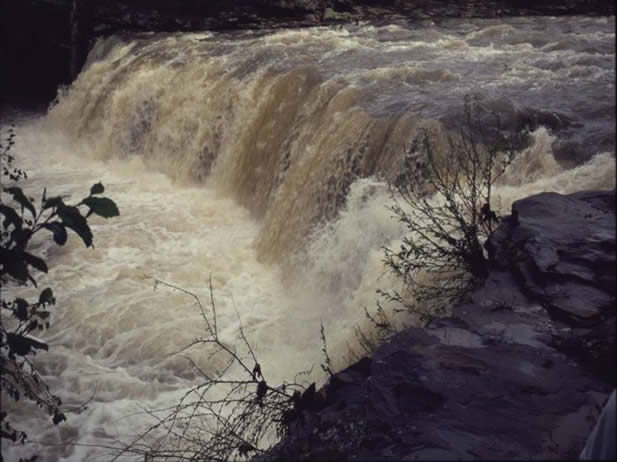 Such events are characteristic of rivers like the Mississippi or Arkansas. Annual flooding along major rivers have lead to channelization, lock and dam systems, levees and other man-made attempts to minimize regional flooding. But these are only temporary efforts and must be constantly maintained and improved.

Flash floods in Arkansas are more typical of the Interior Highlands Region, due to its larger number of smaller drainage basins and steeper stream gradients when compared to the Gulf Coastal Plain Region.

Floods are classified according to their frequency and depth. The phrase "100-year flood" still causes confusion to the public, lenders, and insurers. A 100-year flood does not mean that it is a flood that occurs every 100 years. The term is actually is an abbreviated way of describing the magnitude of a rainfall and subsequent flood that has a one percent chance of happening. A 100-year flood occurs less frequently than a 10-year flood, but because it has larger volume and greater depth of water, it is far more destructive and damaging, and is a more serious threat to human safety. A newer designation termed "base flood" is the equivalent of the term "100-year flood". Base flood elevations in a given area indicate the expected depth of water should that magnitude flood occur.

Radon is a radioactive gas that is odorless, colorless, and tasteless. Radon is also highly soluble in water. It occurs in nature and is not a man-made hazard, but one of the natural environment. Radon is not common, but occurs in trace amounts in most rocks, soils, and groundwaters. Radon is a heavy gas when compared to typical atmospheric gases and can accumulate in "dead" air spaces, such as poorly ventilated sub-grade basements. It may enter the house through cracks, fractures, or other openings in the floor or foundation. Lesser sources of radon in the home include the release of dissolved gas from water used for bathing or showering. 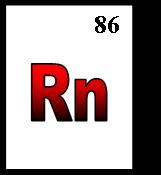 This element is part of the natural radioactive decay path of the uranium-lead series and can be found in nearly all soils and rocks in greater or lesser abundance. It forms directly from the breakdown of Radium. Chemists and health experts tell us it is not so much the radioactivity associated with the element Radon itself, but those daughter products that are also radioactive. A daughter product is any one of the intermediate elements produced in the series from parent to end product, in this case the Uranium to Lead series. Radon has a short half-life of 3.8 days. The half-life of a radioactive element is the length of time it takes for half of the radioactive element to undergo radioactive decay. When radon decays, it produces polonium as a daughter product, also radioactive but with a longer half life of 138 days, along with bismuth and lead. 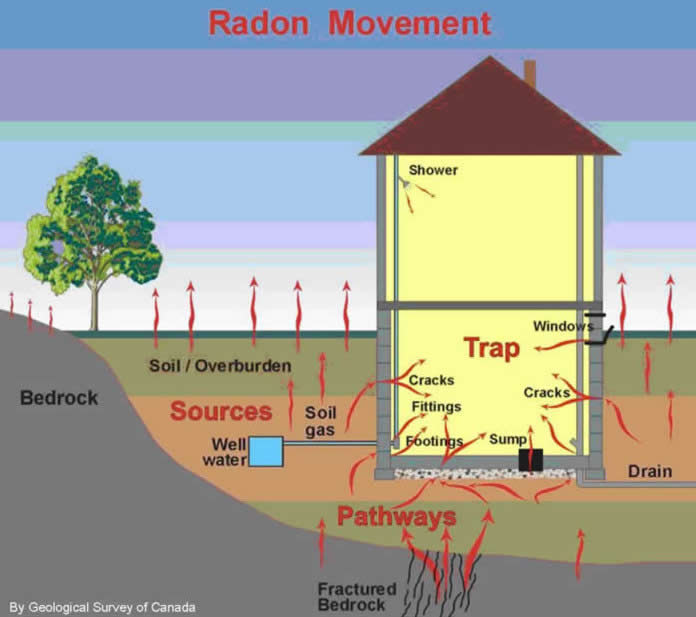 Studies by the Environmental Protection Agency (EPA) have shown that certain areas of the United States are at higher risk for radon-induced lung cancer. This risk is considered less than that of lung cancer for cigarette smokers, but it still exists. Some of the factors controlling these risks include: the regional geology, especially granitic terrain that typically contains greater concentrations of radioactive elements than sedimentary rocks; local building factors controlled by climate (full basements in northern climates); soil moisture content (dry vs. saturated); homeowner’s personal habits; and general house construction techniques (super tight insulated houses are at higher risk). Generally, if your home has good air circulation and no basement, there should be little risk associated with radon no matter where you live. However, that is not to say, since the only ready way to detect radon is by specialized radon detectors, that the risk may not be present. The only way to be certain is to have the home tested.

Health officials have set indoor radon health standards based on human exposure to measured radon concentrations. Slight health risks are considered to be < 1 to 2 picoCurie/Liter (pCi/L). Moderate health risks fall in the range of 2 to 4 pCi/L. High health risks are considered to be those measured at > 4 pCi/L. At > 4 pCi/L concentrations, it is estimated for 1,000 people, 4 additional cases of lung cancer may be seen in the general population. Remediation measures are strongly recommended for any site testing greater than 4 pCi/L. Such measures typically include venting of air space, sealing cracks in floors, and foundations, and sealing of porous concrete block.

A study of Arkansas by the EPA assessed the radon potential for the state. The following information is from the EPA Region 6 Geologic Radon Potential Summary (1993):

The geologic radon potential of Arkansas is generally low to moderate. Paleozoic marine limestones, dolomites, and uraniferous black shales appear to be associated with most of the indoor radon levels greater than 4 pCi/L in the State.

Ordovician through Mississippian-age sedimentary rocks, including limestone, dolomite, shale, and sandstone, underlie most of the Springfield and Salem Plateaus [in north Arkansas]. Black shales and residual soils developed from carbonate rocks in the Springfield and Salem Plateaus [geographic regions generally confined to the northernmost tier of two counties in north Arkansas] are moderate to locally high in geologic radon potential. The Ordovician limestones, dolomites, black shales, and sandstones have moderate (1.5-2.5 ppm) to high (>2.5 ppm equivalent uranium (eU, from aeroradioactivity surveys) and some of the highest indoor radon in the State is associated with them. The Mississippian limestones and shales, however, have low (<1.5 ppm) equivalent uranium with very localized areas of high eU, but also have moderate to high levels of indoor radon associated with them. Black shales and carbonaceous sandstones within the Mississippian, Devonian, and Ordovician units of the plateaus are the likely cause of the local areas of high eU. The Chattanooga Shale and shale units within the Mississippian limestones may be responsible for some of the high indoor radon levels found in Benton County. Limestones are usually low in radionuclide elements but residual soils developed from limestones may be elevated in uranium and radium. Karst and cave features are also thought to accumulated radon.

The Boston Mountains, Arkansas Valley, Fourche Mountains, and Athens Plateau [Fouche Mountains and Athens Plateau are geographic subdivisions of the Ouachita Mountains] are underlain predominantly by Mississippian and Pennsylvanian sandstones and shales with low to moderate radon potential. Although the indoor radon average for these provinces is low, there are a number of counties in these provinces with screening indoor radon averages slightly higher than 1 pCi/L and maximum readings greater than 4 pCi/L. The marine black shales are probably uranium-bearing. Further, carbonaceous sandstones in the Upper Atoka Formation and Savanna Formation have high (>2.5 ppm) eU associated with them. Uranium also occurs in the Jackfork Sandstone in Montgomery County and the Atoka Formation in Crawford County. These rocks are the most likely sources for the indoor radon levels. Radon from a hydrocarbon source in these rocks should not be ruled out. The presence of radon and uranium in some natural gas, petroleum, and asphaltite is well known and could contribute radon to indoor air in some locations.

The West Gulf Coastal Plain is generally low in radon potential. Some of the Cretaceous and Tertiary sediments have moderate eU(1.5-2.5 ppm). Recent studies show that glauconite and phosphate in sandstones, chalks, marls, and limestones, as well as black organic clays, shales, and muds, are often associated with high concentrations of uranium and radon in the sediments, and could be sources for elevated indoor radon levels. Several formations within the Gulf Coastal Plain of Arkansas contain these types of sediments, especially in parts of the upper Cretaceous and lower Tertiary section, but average indoor radon levels in this area are not elevated. The Quaternary sediments of the Coastal Plain have low eU and the indoor radon average is low for the Gulf Coast overall.

The Mississippi Alluvial Plain and Crowley’s Ridge have low to locally moderate radon potential. The southern half of the Mississippi Alluvial Plain is made up predominantly of quartzose sediments, has generally low eU, and has low indoor radon. The northern half of the alluvial plain, however, includes the loess of Crowley’s Ridge, which appears to have high equivalent uranium associated with it, and possibly a high loess content in the surrounding soils in general. The northeastern corner of Arkansas appears to be crossed by the large belt of loess that continues into Kentucky and Tennessee and shows as a distinct area of high eU on the aeroradiometric map of the United States. Some areas of high eU may also be due to uranium in phosphate-rich fertilizers used in agricultural areas. Several of the counties in the northern part of the alluvial plain have maximum indoor radon values greater than 4 pC/L and indoor radon averages between 1 and 2 pCi/L, which are generally higher than those in surrounding counties.

It should be noted from the previous quoted study that no granite outcrops exist in Arkansas. This helps explain the classification of Arkansas as a moderate to low risk potential state for radon. Linda Gundersen of the US Geological Survey (1993 open-file report) also authored a paper concerning the geologic radon potential assessment for Arkansas. Her work summarized the results from testing of 1,535 homes statewide during the winter of 1990-91. The average indoor radon for the state was 1.2 pCi/L and 5.3 percent of the homes tested had screening indoor radon levels exceeding 4 pCi/L. Most of these locations were confined to the northern two tiers of counties in north Arkansas. She noted that Paleozoic marine limestones, dolomites, and uraniferous black shales appear to be associated with most of the indoor radon levels greater than 4 pCi/L in the State.

Home test kits are presently available to the public to check the home for radon levels. They come with a simple set of instructions and must be mailed to specific laboratories that will provide the homeowner with the results of the test. To find where to purchase radon test kits, look them up on any Internet search engine.

If values above 4 pCi/L are shown by the test, then action is warranted. The following immediate actions are recommended by the Arkansas Department of Health:

It is important to recognize that these are temporary remedial measures. To resolve the situation, professionals should be contacted to evaluate the situation and recommend remediation actions.

In summary, the general public in Arkansas has an overall low exposure potential to radon. Should a homeowner be concerned about the levels of radon in their home, tests can provide quick and ready answers to that concern.

For additional information concerning Radon, its potential health hazards, and literature for homeowners on this subject, contact Bernard R. Bevill, Arkansas Department of Health, at bernard.bevill@arkansas.gov.