Rocks are generally placed into 1 of 3 major categories: igneous, metamorphic, or sedimentary. Igneous rocks have solidified from molten or partly molten mineral matter. Metamorphic rocks have been altered in the solid state from some pre-existing condition in response to significant changes in temperature, pressure, or chemical environment. Sedimentary rocks are composed of particles of sediment, which are derived by the weathering and/or the erosion of pre-existing rock. Most of the rocks exposed at the surface in Arkansas are sedimentary, but there are some igneous rocks (with adjacent contact metamorphic rocks) and very low grade regional metamorphic rocks in Arkansas also.

The exposures of igneous rocks in Arkansas are less than 0.1 percent of the entire area of the state. Most are exposed over 15 square miles, principally in Pulaski, Saline, Hot Spring, Garland, and Pike Counties. A few small igneous dikes and sills are present outside the Ouachita region, mostly in the Arkansas Valley, and in at least one case, in the Boston Mountains. Except for some localized contact metamorphism adjacent to the larger igneous intrusions, only very low grade metamorphic rocks are present in the state.

Arkansas is divided into a highland area in the northwest and a lowland region in the south and east. The rocks in the highland area are dominated by well-lithified sandstones, shales, limestones, and dolostones of Paleozoic age. A thin drape of younger unconsolidated clays, sands, and gravel, termed alluvium, is often found in valley floors and associated with the streams and rivers. The sedimentary deposits of the lowlands are mainly unconsolidated clay, sand, and gravel of Quaternary age, poorly consolidated deposits of clay, sand, silt, limestone, and lignite of Tertiary age, and consolidated (to a limited extent) deposits of Cretaceous marl, chalk, limestone, sand, and gravel (see Geologic Map of Arkansas below). Download Arkansas Physiographic Province Map (subdivisions) and Arkansas Physiographic Province Map (county base). 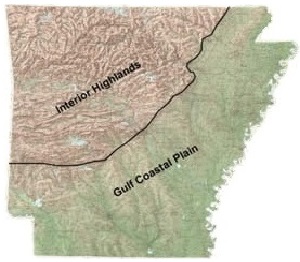 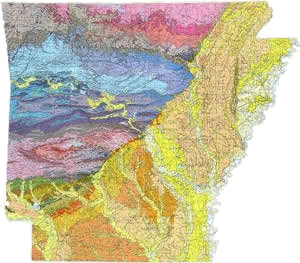 When most of the sediments that compose the rocks in the highland region of Arkansas were being deposited, north Arkansas was a shallow south-sloping sea floor (continental shelf), the Arkansas River Valley was near the edge of the shelf, and the Ouachita area was a deep abyssal plain (see Geologic History). An abyssal plain is the relatively smooth and deep (more than 3,000 feet below sea level) parts of the ocean floor where accumulating sediments have buried the pre-existing topography. In the late PreCambrian Era, a broad uplift domed the Ozark strata with little structural disruption. Starting in the middle to late Paleozoic, a collision of two of the earth's mobile continental plates compressed the sediments of the abyssal plain into the Ouachita Mountains. This multimillion-year-long process folded and faulted the Ouachita strata into a structurally complex mountain chain. The Arkansas River Valley area is the transition zone between the structurally simple Ozarks and the structurally complex Ouachitas with subdued characteristics in each region.

Today, the rocks of the Ozarks tilt slightly to the south and have a dendritic drainage pattern. Since shales and siltstones erode faster than sandstones and limestones, the basic topography is flat-topped mountains with stepped flanks. By contrast, the topographic expression of the Ouachitas is controlled not only by the erosional resistance of the rocks, but also by their internal structure. The strata are complexly folded and frequently faulted. The mountains are mostly east-west-trending ridges supported by erosionally resistant rocks and separated by less resistant rocks. The Arkansas River Valley is characterized by much less intensely folded and faulted strata than the Ouachita region. Erosional processes left the synclines as mountains and the anticlines as valleys.

The past 500 million years of geologic history of Arkansas may be interpreted from the rocks and sediments exposed in the state. A summary of major geologic events, recorded in the rock record, is presented below in a manner (oldest at the bottom, youngest at the top) that allows this information to be readily compared with the correlation charts displayed as part of the Stratigraphic Summary of Arkansas.

Holocene (Present to .01 Ma):Frequent flooding of the Mississippi and other rivers results in deposition of alluvium. Sand dike injection and extrusion during major earthquakes occurs in northeastern Arkansas. Erosion of the Interior Highlands and down-cutting by most streams occurs.

Pleistocene (.01 to 2.6 Ma): Local alpine snow packs form in the Boston Mountains and Ouachita Mountains. Repeated intervals of erosion and deposition of glacial outwash by the ancestral Mississippi and Ohio Rivers form the Eastern and Western Lowlands and Crowley’s Ridge. Sand and silt winnowed from the outwash form dunes and sheet-like deposits of loess. Erosion occurs over most of the Interior Highlands.

Eocene (33.9 to 55.8 Ma): Marine and fluvial clastic sediments fill the Mississippi Embayment; transportation of some bauxite; swampy conditions favorable to the accumulation of plant debris (lignite). Erosion occurs in the Interior Highlands.

Paleocene (55.8 to 65.5 Ma): Shallow marine sea in the Mississippi Embayment; formation of nearshore reefs and layers rich in marine remains and accumulation of dark marine clays; development of bauxite on islands of exposed Cretaceous igneous rocks. Erosion occurs in the Interior Highlands.

Deposition of water-laid volcanic debris preceded the accumulation of sand, marl, and chalk in shallow marine seas during the Late Cretaceous. About 100 Ma, downwarping of the Mississippi Embayment resulted in the invasion of the region by a shallow sea. Igneous activity in central, southwestern, and eastern Arkansas; nearshore deposition of clastic and carbonate debris in the Early Cretaceous, along with deposition of gypsum and anhydrite in highly saline waters in southwestern Arkansas. Erosion occurs in the Interior Highlands.

Deposition of carbonate sand (often oolitic) in a shallow marine environment and some red clay and anhydrite in a shallowing sea; preceded by the accumulation of a thick sequence of salt beds (halite), some anhydrite, and red clay and silt in shallow highly saline waters. Present only in the subsurface in southern Arkansas. Erosion occurs in the Interior Highlands. Jurassic or Triassic: Intrusion of small localized bodies of magma in southern Arkansas, which crystallized to form igneous rocks.

Accumulation of predominantly red clay and silt, sand and gravel, and minor beds of anhydrite in a non-marine environment. Present only in southern Arkansas (in the subsurface). Age is indefinite. Erosion occurs in the Interior Highlands.

Erosion occurs. Last interval of uplift of the Interior Highlands and end of milky quartz-vein formation.

Ouachita region: Rapid influx of clastic sediments in a deep marine trough followed by intense deformation, such as folding, faulting, and, at depth, low-grade metamorphism; uplift during the Ouachita orogeny. Concurrent formation of quartz veins.

Ouachita region: Rapid influx of clastic sediments in the Late Mississippian following slow accumulation of siliceous ooze and clay in the Early Mississippian.

Ouachita region: Slow influx of sand and clay in a deep marine environment.

Ozark region and northern part of Mississippi Embayment: Granitic-type igneous rocks (some approximately 1,400 Ma) have been encountered in some wells.

Ouachita region: Erratic boulders of late Precambrian igneous and metamorphic rocks and sparse tectonically emplaced bodies of metamorphosed igneous rocks (~ 1,000 Ma) are present in Paleozoic rocks. In these areas, there is no evidence of the succession of events during Precambrian time. Although not exposed elsewhere, Precambrian rocks are assumed to underlie the entire state.

This rock was formed by the weathering of nepheline syenite under tropical conditions, a process called laterization.  It is a type of lithified soil which is relatively low in silica and high in aluminum.  Bauxite was discovered in Arkansas before 1900 and was a major source of ore for aluminum metal for some 90 years in Saline and Pulaski Counties.  There are many uses for processed bauxite, aside from metal, including abrasives, cement, refractories, and chemicals.  Aluminum compounds are essential ingredients in many common household items, including deodorants, antacids, and paper.

History of Bauxite in Arkansas Pamphlet

Quartz is composed of oxygen and silica combined in a ratio of 2: 1. This mineral is hard, durable, weather-resistant, and relatively common.  Quartz crystals formed as hot waters percolated through fractured rock in the Ouachita Mountains some 245 million years ago.  Chemically pure sources of quartz are in much demand by industry as a source of the raw chemical feedstock for the manufacture of quartz wafers, silicon metal, glass, fused quartz, and optical fiber.  Arkansas has the most significant economically valuable deposits of high-quality quartz in the United States.

Diamonds were first discovered in Arkansas in 1906. Since that time over 100,000 diamonds have been recovered from the site now known as Crater of Diamonds State Park. The average size recovered is about .21 carat. Colors of the diamonds range from white to yellow and brown and the natural crystals are usually rounded. The largest diamond found in Arkansas is The Uncle Sam, found in 1924. This diamond weighed 40.24 carats.

Geologists look at outcrops anywhere they are accessible and sometimes in places not so accessible. Every now and then we find outcrops so interesting that we cannot keep them to ourselves and as a result we create guidebooks to share with everyone! In our wanderings "in the field" we locate numerous rock spots along roads, trails, or streams. To see outcrops along roads view the Roadside Geology section below or to see outcrops along streams view the Geofloats section below.