Unlike earthquakes, floods, and landslides, few people are aware of expansive soils, yet this hazard renders substantial damage amounting to billions of dollars. Expansive soils affect almost every state, including Arkansas. In Arkansas, certain soils that have an expansive clay component are susceptible to causing damage to property.

Expansive clays in Arkansas are a source of concern because they shrink and swell according to their moisture content. If this uneven shrink and swell is not considered during construction, structures such as houses can literally break apart. Highways are also susceptible to damage from expansive clays resulting in higher maintenance costs. Many expansive soils problems can be accommodated through engineering techniques employed prior to construction. In Arkansas, the clays of the Porters Creek Clay of the Midway Group are highly expansive. The Porters Creek Clay outcrops in a narrow but continuous belt along the Fall Line from just south of Hope to near Arkadelphia and intermittently from Malvern to near Batesville. 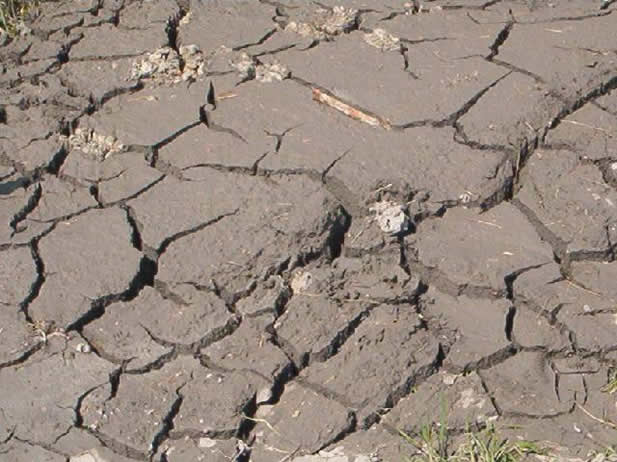 General Geologic Description for the Midway Group (including the Porters Creek Clay):
The Midway Group is a sequence of "marginal marine" calcareous clay, claystones, clay shales, calcareous sandstones, and porous arenaceous limestones. Invertebrate fossils and fossilized reptile teeth are common. The Midway Group is locally divisible into two recognizable units: the Porters Creek Clay and the Clayton Limestone. The Porters Creek Clay is interval of dark bluish-gray to black calcareous clay sparsely fossiliferous with occasional fragments of limestone. The Porters Creek Clay contains highly expansive soils and is considered an aquitard, thus typically yields very little water to wells. Locally, outcrop thickness ranges from 0 to 130 feet and overlies the Clayton Limestone. The Clayton Limestone is comprised of thin to thick beds of white to light gray fossiliferous limestone, occasionally separated by thin clay beds and sandy intervals. The limestone is typically porous and fractured with varying thickness (up to 20 feet thick locally) and has a limited lateral extent. The Clayton Formation is considered a minor aquifer and typically yields sufficient water for household supplies. Locally, the units of the Midway Group will most likely occur as thin to thick lenticular bodies. This is due to either deposition on an irregular erosional surface, or by intermittent deposition interrupted by intervals of erosion. An unconformable surface separates the Midway Group from the underlying Paleozoic rocks at most localities.

The Porters Creek Formation
The total thickness ranges from 3 to 40 meters, and the formation outcrops around the boundaries of the Mississippi Embayment, in the states of Mississippi, Tennessee, Kentucky, Illinois, Missouri and Arkansas. The minerals contained within the Porters Creek Formation consist of calcium-magnesium smectite, opal C-T, kaolinite, illite and trace amounts of halloysite and clinoplitolite (Reisch, 1992).

What do we mean by "Expansive Soil"?

To understand why some soils expand, it is important to realize that many soils contain clay. Certain types of clay are capable of absorbing water. Water molecules can actually squeeze into the chemical structures of the clay minerals that make up the soil. When this happens, the clay can actually expand in order to accommodate the water. Expansion can cause significant volume increases in the soil. Swelling can actually cause the ground and anything constructed upon the ground to gradually to be effected. Expansive soils can force concrete foundations, to crack. Conversely, expansive soils can also shrink when water is removed from the chemical structure within the clay contained within the soils. Over time, the continually shrinking and swelling of the clay minerals can render significant damage to buildings and structure over time. 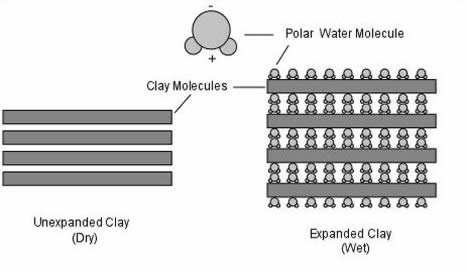 There are no expansive soil case studies reported at this time. If you are concerned that expansive soils have caused damage to your home or property, contact the Arkansas Geological Survey for more information.