Age: Early Mississippian Period
Distribution: Northern Arkansas, Ozark Plateaus; Oklahoma, southern Missouri
Geology: The St. Joe Limestone is a fine-grained, crinoidal limestone that may occasionally contain some smoothly bedded chert. Some beds may display a coarse bioclastic texture. The limestones (and cherts) are frequently gray, but may also be red, pink, purple, brown, or amber. The fossil clasts are generally white in contrast to the matrix. Some thin calcareous shales are found in the sequence (top, lower middle, and base). The base of the St. Joe Limestone is generally marked by a phosphatic, greenish shale or conglomerate. It is a frequent bluff former. A formation rank has been suggested by some workers for the St. Joe Member of the Boone Formation. Crinoids, brachiopods, bryozoa, conodonts, blastoids, ostracods, and rugose coral have been noted in the unit. The basal contact is considered disconformable in most places, but some workers suggest a conformable lower contact with the Chattanooga Shale. The St. Joe Limestone ranges from a feather edge to over 110 feet in thickness.

At various localities a sandstone is present at the base of the St. Joe Limestone.  Excerpt from Fiftysix quadrangle description:  The basal sandstone is a fine to medium-grained, moderately sorted, sub-rounded to rounded, iron or quartz-cemented sandstone.  White to light gray and tan on fresh surface but sometimes blotchy due to iron.  Weathers dark gray, tan, or black.  Thin to thick bedded but most often seen as float.  Contains phosphate pebbles and angular white and light gray chert fragments.  The greatest thickness (approx 12 ft.) of this sandstone is near Gayler Crossing in the NE1/4, SW1/4, Sec 21, T15N, R11W.  This unit yields abundant conodonts.  0 - approx. 12 ft. thick. 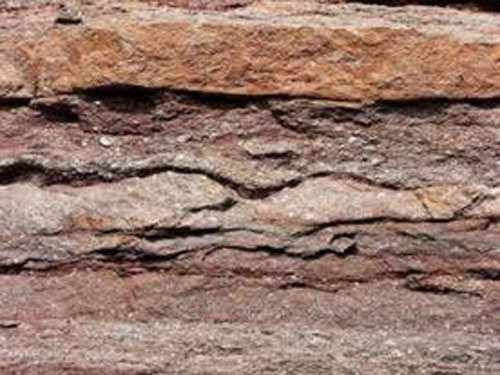 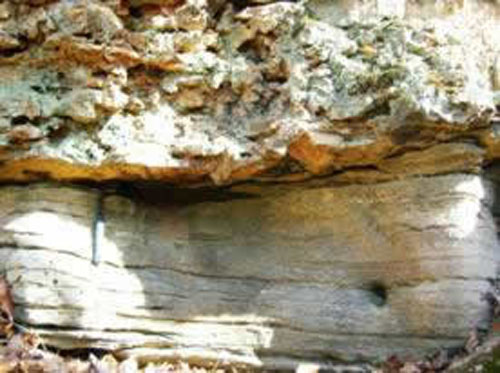 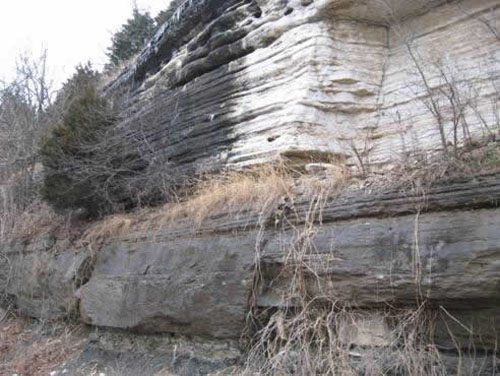 Age: Early and Middle Mississippian Period
Distribution: Northern Arkansas, Ozark Plateaus; southwestern Missouri and eastern Oklahoma
Geology: The Boone Formation consists of gray, fine- to coarse-grained fossiliferous limestone interbedded with chert. Some sections may be predominantly limestone or chert. The cherts are dark in color in the lower part of the sequence and light in the upper part. The quantity of chert varies considerably both vertically and horizontally. The sequence includes an oolite member (Short Creek Member) near the top of the Boone Formation in western exposures and the generally chert-free St. Joe Member at its base. The Boone Formation is well known for dissolutional features, such as sinkholes, caves, and enlarged fissures. Crinoids are the most common fossil found in the formation, but brachiopods, bryozoa, mollusks, corals, shark material, trilobites, conodonts, and others fossils are known. The lower contact of the Boone Formation is considered disconformable in most places, but some workers suggest a conformable lower contact with the Chattanooga Shale; the contact with the St. Joe Member is conformable. The thickness of the Boone Formation is 300 to 350 feet in most of northern Arkansas, but as much as 390 feet has been reported.
Original reference: J. C. Branner and F. W. Simonds, 1891, Arkansas Geol. Survey Ann. Rept. 1888, v. 4, p. xiii, 27-37.
Type locality: Named for extensive development in Boone County, Arkansas 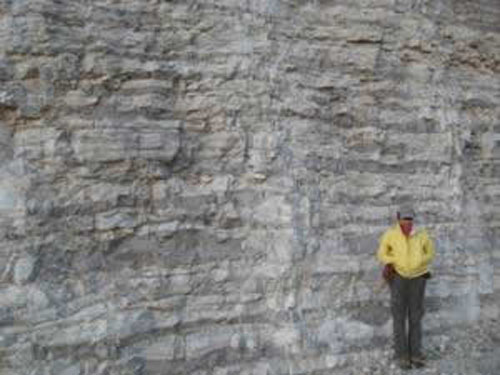 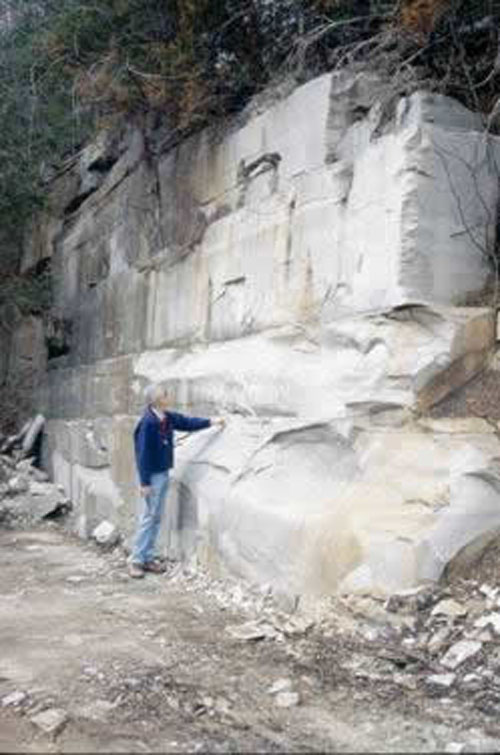 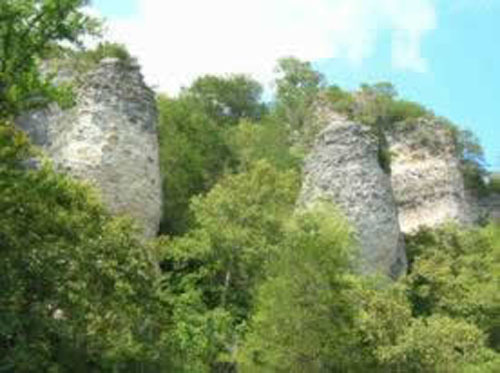 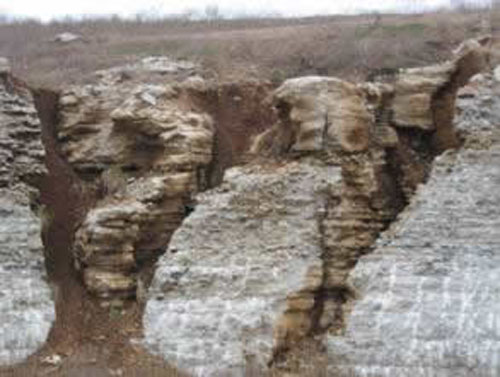 Age: Late Mississippian Period
Distribution: Central northern Arkansas, Ozark Plateaus; central eastern Oklahoma
Geology: The Moorefield Shale in the Batesville area consists of a lower member of black, calcareous shale and siliceous limestone and an upper member of dark, fissile clay shale. The unit listed as the Ruddell Shale on the state geologic map is usually considered part of the Moorefield Formation and is equivalent to the upper member listed here. The formation is sparsely fossiliferous in much of the sequence, but locally may contain an abundant fauna dominated by cephalopods and brachiopods. The lower boundary is sharp and considered unconformable by most workers. The thickness ranges from a thin edge to 300 feet.
Original reference: G. I. Adams, 1904, U. S. Geol. Survey Prof. Paper 24, p. 26.
Type locality: Named for Moorefield, Independence County, Arkansas. 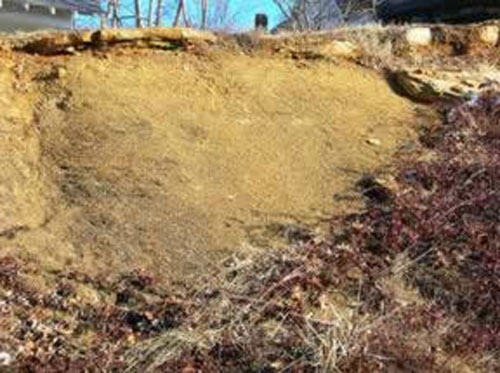 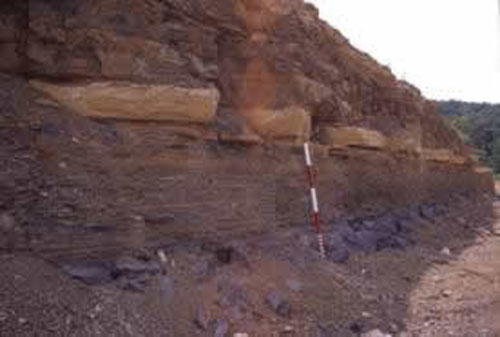 Age: Late Mississippian Period
Distribution: Northern Arkansas, Ozark Plateaus; southern Missouri and northeastern Oklahoma
Geology: The Batesville Sandstone is often a flaggy, fine- to coarse-grained, cream-colored to brown sandstone with thin shales. A limestone member, the Hindsville Member, found mostly in western outcrops, is a crystalline, fossiliferous limestone that, when present, usually occurs at the base of the formation. In western Arkansas the Hindsville Member may be the only representative of this unit. Fossils are somewhat common in the Hindsville Member, but generally sparse in the sand facies. The basal contact is unconformable and often marked by a chert (Boone Formation) conglomerate. The thickness of the Batesville Formation is quite variable, ranging from a feather edge to over 200 feet. The thickest sections are in Independence County.
Original reference: J. C. Branner and F. W. Simonds, 1891, Arkansas Geol. Survey Ann. Rept. 1888, v. 4, p. xiii, 26, 49-53.
Type locality: Named for Batesville, Independence County, Arkansas 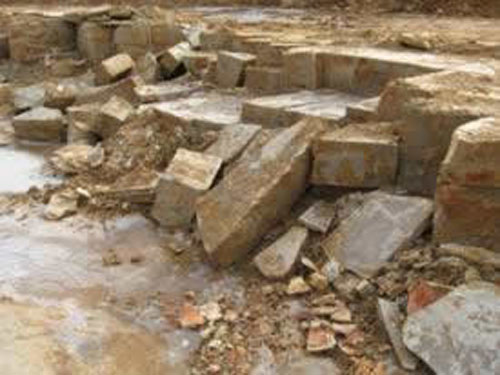 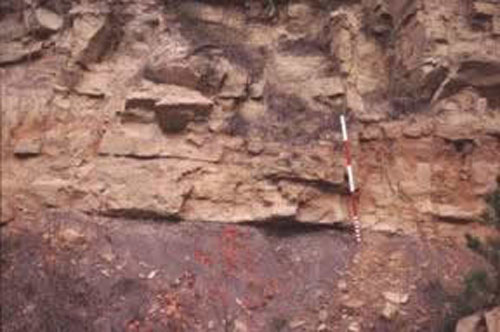 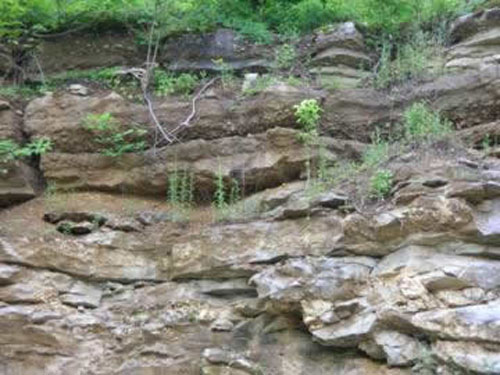 Hindsville Member (upper half of picture), consisting of a conglomeratic limestone, above the cherty Boone Limestone

Age: Late Mississippian Period
Distribution: Northern Arkansas, Ozark Plateaus; southern Missouri, eastern Oklahoma
Geology: The Fayetteville Shale is a black, fissile, concretionary, clay shale. Dark-gray, fine-grained limestones commonly are interbedded with the shales in north-central Arkansas. The Wedington Sandstone Member, known from west Arkansas outcrops, is composed of gray to brown, fine-grained, sometimes calcareous sandstone. Septarian concretions are common in lower beds of the Fayetteville, but may be found throughout the formation. Fossils are abundant in some intervals and in local areas. Most of the fauna recovered is pyritic, but some silicified material is found. The formation is considered to rest conformably on the Batesville Sandstone (and Hindsville Member). The Fayetteville Shale ranges in thickness from 10 to 400 feet.
Original reference: F. W. Simonds, 1891, Arkansas Geol. Survey Ann. Rept. 1888, v. 4, p. 26, 42-49.
Type locality: Named for Fayetteville, in the valley of the West Fork of White River, Washington County, Arkansas 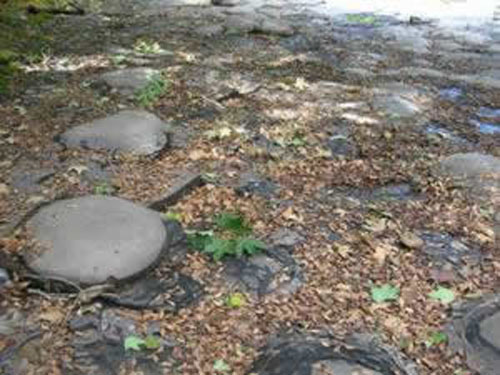 The lower portion of the Fayetteville Shale, Witts Springs Quadrangle 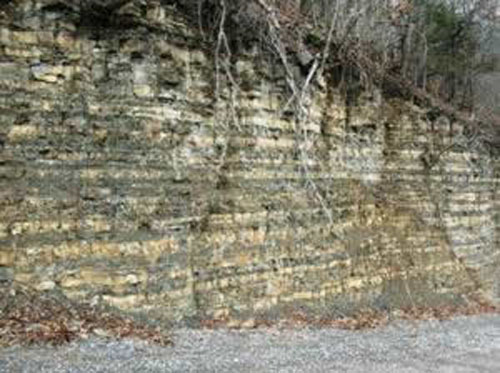 The upper portion of the Fayetteville Shale on Blue Mountain, near Oxley

Age: Late Mississippian Period
Distribution: Northern Arkansas, Ozark Plateaus; eastern Oklahoma
Geology: The Pitkin Limestone is usually a fine- to coarse-grained, oolitic, bioclastic limestone. Sequences of black shale interbedded with the limestone occur in the eastern outcrop area, minor chert is sometime present near either the top or bottom of the interval, and minor sandstone has been reported near the top of the unit in the northwest. The unit becomes more shaly to the south. Fossils are common and include crinoids, brachiopods, bryozoa, corals, bivalves, gastropods, cephalopods, trilobites, conodonts, and shark teeth. The bryozoan Archimedes is a good marker fossil for this unit but does occur in other subjacent formations. The basal contact of the formation is conformable. The thickness of the Pitkin Limestone ranges from a thin edge to over 400 feet. The average thickness is about 50 feet in the west and about 200 feet in the east.
Original reference: G. I. Adams and E. O. Ulrich, 1904, U. S. Geol. Survey Prof. Paper 24, p. 27, 109.
Type locality: Named for exposures near Pitkin post office in Washington County, Arkansas

Mapping since 2007 in areas east of western Searcy County has differentiated a unit of latest Mississippian age that has been informally designated the Imo shale member of the Pitkin Formation. Its lower contact is placed above the uppermost continuous limestone bed of the Pitkin Limestone in the Pitkin Formation, and below the lowest continuous unit of interbedded sandstone/siltstone/shale of the Cane Hill Member in the Hale Formation. This upper contact is most likely shale on shale so is difficult to distinguish in the field. A description from the Canaan quadrangle follows: 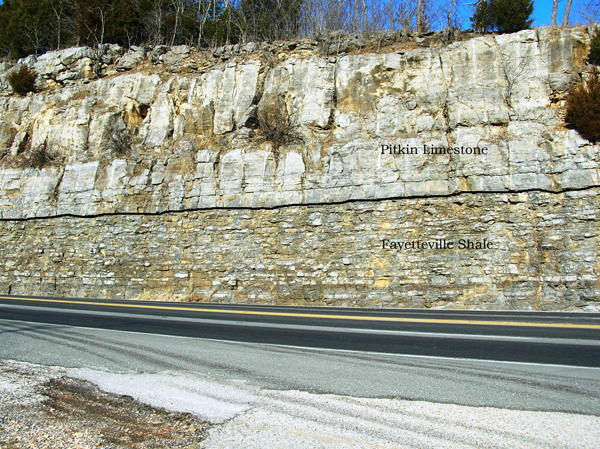 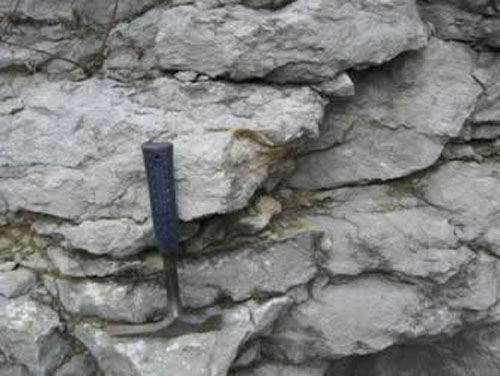 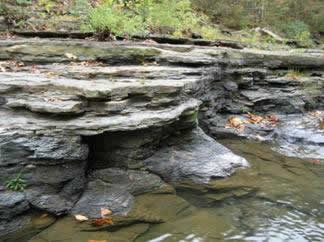 Age: Late Devonian Period (and Early Mississippian Period)
Distribution: Northern Arkansas, Ozark Plateaus; Tennessee, Alabama, Kentucky, Mississippi, and Oklahoma
Geology:Typically a black, fissile clay shale that weathers into thin flakes. The beds are usually cut by prominent joints creating polygonal blocks upon weathering. The upper part of the formation may be slightly sandy and usually contains abundant pyrite. The Chattanooga Shale is all Devonian in Arkansas. A lower sandstone Member (Sylamore Sandstone) may dominate or fill the Chattanooga Shale interval in some areas. The Sylamore is a white to dark-gray phosphatic quartz sandstone. Its texture is fine-grained to sandy conglomerate. The formation contains few fossils, but conodonts and some brachiopods have been recovered. The basal contact is unconformable. The thickness of the Chattanooga Shale(including the Sylamore Sandstone) ranges from 0 to about 85 feet, but normally averages about 30 feet.
Original reference: C. W. Haynes, 1891, Geol. Soc. America Bull., v. 2, p. 143.
Type locality: Hillside exposure at north end of Cameron Hill, Chattanooga, Hamilton County, Tennessee. Standard section: Cut on Tennessee Highway 26, at east approach to Silgo Bridge over Caney Fork, 7.1 miles east of courthouse at Smithville, DeKalb County, Tennessee 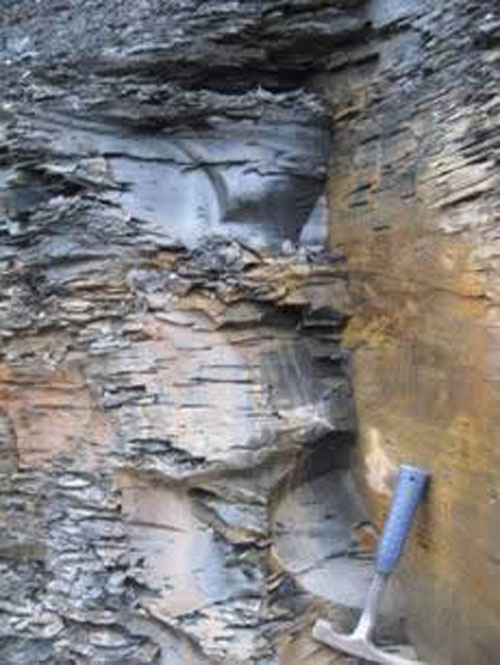 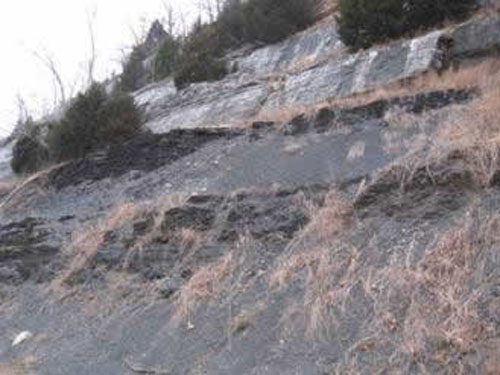