Many minerals contain antimony (Sb), a soft white metal with a low melting point. However, stibnite and antimonial lead ores are the main sources of the metal. Stibnite (Sb2S3) and stibiconite (Sb3+Sb25+O6(OH)) were the only minerals mined in Arkansas for this metal. Stibnite is steel-gray, has a relatively high specific gravity (4.6), a metallic luster, and often forms slender prismatic crystals that may have a curved habit. Stibiconite is an earthy yellow oxide formed by the weathering of stibnite. 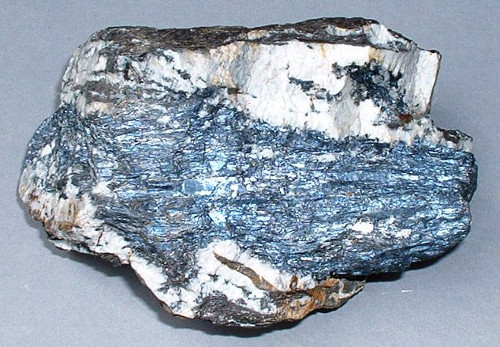 Antimony is a hard, brittle, silver-white metal with a relatively high specific gravity (6.69) and a relatively low melting temperature. Antimony is a constituent in some alloys. The presence of this metal hardens the alloy, lowers the melting point, and decreases contraction during solidification. The metal's main use is to impart stiffness and hardness to lead alloys. Antimony compounds are used in medicines, the rubber and patent-leather industries, paint pigments, enamelware glazes, and as fire-proof coatings on clothing.

Mining of antimony ore has been limited to northern Sevier County, although some stibnite is also present in Pike County, associated with cinnabar (HgS). Mined deposits occurred as lenses or pockets of stibnite encased in nearly vertical quartz veins that cut steeply dipping, folded, and faulted beds of the Stanley Shale (Mississippian). The veins strike generally east-west. Sulfides of copper, zinc, iron, and bismuth may be locally associated with the antimony ores. Antimony was mined intermittently in Arkansas after its discovery in 1873. Mining activity peaked during World War I when metal prices were high. Some ore was recovered from shallow trenches excavated along the trend of the larger veins. Underground mining consisted of sinking shafts or driving horizontal entrances (adits) into surface-exposed ore bodies, driving crosscuts through the veins, and tunneling along the strike of the veins into adjacent ore bodies. There was no exploratory drilling program. The only ore reserves noted were those exposed on the ore face during mining. Potential resource of the district is estimated by the U. S. Bureau of Mines at about 5,000 tons of concentrates. Total production of antimony concentrates through 1947, the last year of mining, were estimated by the U. S. Bureau of Mines at 5,390 tons.