No metal has gained attention throughout history as has gold. Gold (Au) was one of the earliest metals to be utilized due largely it exists as a native metal. It has unique properties which made it workable by early man. Its bright yellow metallic luster catches the eye. Gold is relatively soft, melts at a low heat, and may be hammered, cut, or drawn into fine wire. The metal has a very high specific gravity (19.3) which facilitates its recovery from ores. Gold has superior electrical conductivity and resistance to corrosion. 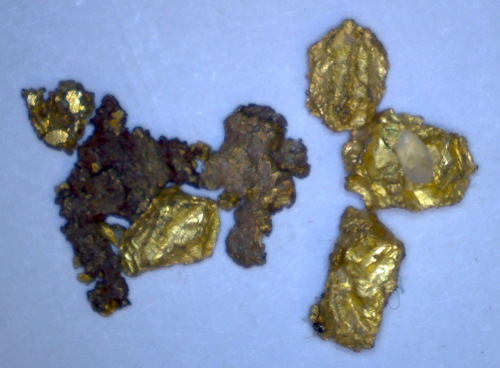 Gold is used several ways, but over half the world's yearly consumption is in jewelry and artwork. In jewelry, pure gold is alloyed with copper and silver to increase its hardness. Purity is expressed in carats; pure gold being 24 carats. Therefore, 14 carat gold used in jewelry contains 14 parts pure gold and 10 parts of other metals. Gold has emerged in the late 20th century as an essential industrial metal, used in computers, communication equipment, spacecraft, jet airplane engines, and many other applications. Gold is known for its use in jewelry, dental use, and for investment purposes (coins and bars).

In the early 1880's, reports and rumors of gold finds in Arkansas prompted an investigation by the Arkansas Geological Survey. The results of the study were released in the Annual Report of the Arkansas Geological Survey for 1888 - Volume I. The conclusion was that no workable quantities of gold existed in the Ouachita Mountains region. In 1923, investigations by U. S. Geological Survey geologists in the vicinity of Hot Springs, Garland County, revealed sparse amounts of silver and gold in vein material associated with igneous dikes. In summary, no payable quantities of gold have been discovered in Arkansas.

Comstock, T. B., 1888, A preliminary examination of the geology of western-central Arkansas, with especial reference to gold and silver: Arkansas Geological Survey Annual Report for 1888, v. I, pt. 2, 320 p.