When considering the entire composition of the earth, iron (Fe) is the most abundant element, but it only comprises approximately 6 percent of continental crust. Metallic iron is silvery-white, malleable, ductile, and may be readily magnetized. Elemental iron has a relatively high specific gravity (7.87) and high melting point. Iron is used primarily in the manufacture of iron and steel products. Also, substantial quantities of iron are consumed as paint pigments, in cement, in refractory materials as a fluxing agent used in smelting nonferrous metals, and as a constituent of some catalysts. Magnetic iron ore, magnetite, is used as shielding materials in nuclear power plants, heavy aggregate in concrete, and as a heavy-mineral medium in some metal refining mills. 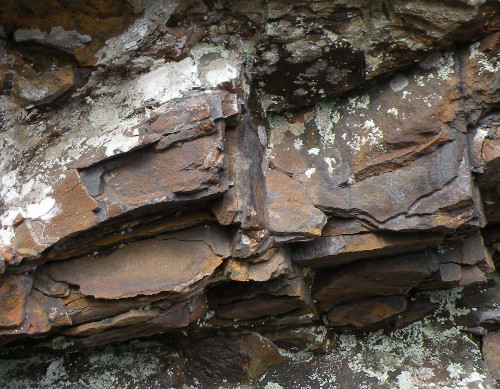 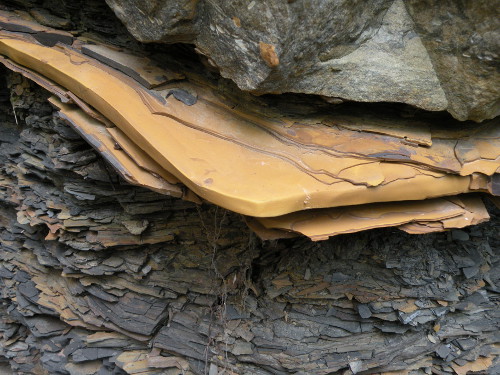 The iron minerals present in Arkansas are the oxides – goethite (Fe3+O(OH)), limonite (hydrous iron oxides), hematite (Fe2O3), and magnetite (Fe2+Fe23+O4); the carbonates – siderite (Fe2+CO3) and ankerite (Ca(Fe2+,Mg,Mn)(CO3)2); and sulfides of iron – pyrite and marcasite (FeS2), and chalcopyrite (CuFeS2). Goethite is highly variable in habit and form, but is easily recognized when it forms lustrous grape-like masses having a radial internal structure and a brown streak when rubbed against unglazed porcelain. Limonite (essentially rust) varies in color from brown, black, or yellow. Hematite or "red iron ore" varies in color from shiny black to blackish red to brick red. Siderite may be highly variable in color, ranging from gray to yellow, green, white, or shades of reddish brown. Magnetite, which is black and has a metallic luster on a freshly broken surface, can be recognized by its magnetic properties. Pyrite, commonly called "fool's gold", is extremely common, may be recognized by its brassy yellow metallic luster, brittleness, and is easily distinguished from native gold, which is quite malleable. Marcasite is known as white iron pyrite.

Iron minerals are common throughout Arkansas, but rarely are they in sufficient quantities to be of commercial value. In Carroll, Lawrence, Sharp, Fulton, and Randolph Counties, secondary deposits of limonite are associated with sandstone, chert, and dolostone formations of Paleozoic age. Deposits of iron-rich concretions are present near hilltops and are residual in nature. Individual deposits were calculated by the U. S. Bureau of Mines to contain 5,000 to 4,000,000 tons of iron ore with the majority probably containing less than 25,000 tons. Smaller deposits are also in Washington and Marion Counties. Past mining of these residual iron ores consisted of small-scale recovery of the harder surface-exposed material. In Hot Spring, Pulaski, Saline, and Cleveland Counties, magnetic iron ores are associated with igneous intrusions. In southern Arkansas, an iron ore-bearing area extends from northeastern Lafayette County northeast into southwest Nevada County. The iron-rich zones are in the Wilcox Group of Tertiary age and formed as concretions of residual limonite by the weathering of bedded siderite. The hilltops in this area have a potential tonnage of ferruginous material exceeding 100 million short tons with an average grade of 30 percent iron. Through 1965, approximately 120,000 tons of iron were produced from the Wilcox deposits, most being shipped to Lone Star Steel in east Texas. A small amount was used as an iron-rich supplement in dog food after 1965.

Two small pig-iron furnaces were operated in Arkansas before 1860, one in Carroll County and the other in Sharp County. About 3,500 tons of magnetite were mined from the central portion of Magnet Cove, Hot Spring County, in the early 1950's. During the early 1960's, iron ore was open-cut mined near Rosston in Nevada County. About 250 tons of iron ore were shipped in 1965, the last year of recorded production. In 1969, the U.S. Bureau of Mines calculated iron ore reserves in Arkansas to be 120 million long tons with an average grade of 30 percent iron. There has been no iron ore for smelting mined in the state since 1965. Currently, there are several iron and steel refineries in Arkansas, utilizing recycled steel and iron.