Manganese (Mn) is a gray-white to silvery metal with a moderate melting temperature and relatively high specific gravity (7.2 to 7.4). Manganese is added to iron along with other metals and carbon, to make steel. Manganese never occurs as the native metal in nature, but instead in some combination with other elements. 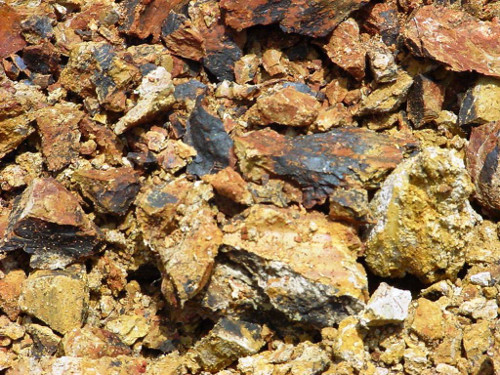 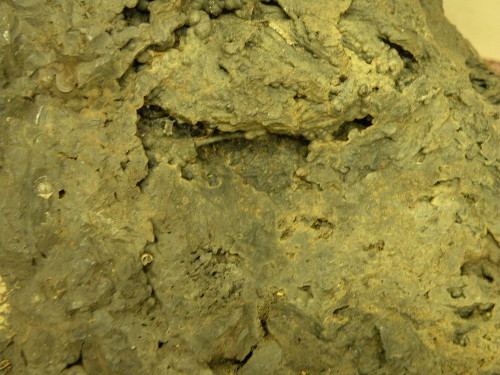 There are over 100 minerals known to contain manganese. The most important manganese ore minerals identified in Arkansas are psilomelane (massive hard manganese oxides), hausmannite (Mn2+Mn23+O4), pyrolusite (Mn4+ O2), wad (soft, massive manganese oxides), and braunite (Mn2+Mn63+SiO12). Other minerals such as manganite (Mn3+O(OH)), bementite (Mn82+Si6O15 (OH)10), and rhodochrosite (Mn2+CO3) have also been noted. Because of its sulfur-fixing, deoxidizing, and alloying properties, the principal use of manganese is in iron and steel manufacture. About 90 percent of the manganese consumed in the United States is in the form of an alloy known as ferromanganese, which is used in the manufacture of steel. Relatively small amounts of manganese and different manganese compounds are utilized in the manufacture of other metal alloys, animal feed, soil conditioners, dyes and paints, pharmaceuticals, dry-cell batteries, and as a coloring material in pottery, tile, and brick.

Commercially important manganese deposits are present in two principal regions in Arkansas – the Batesville district and the West-Central Arkansas district. Other areas of Arkansas have been prospected for manganese and, although mineralization exists, quantities are not economic. Mines in the Batesville district, which includes about 100 square miles located in northwestern Independence County, south-eastern Izard County, and northeastern Stone County, produced over 98 percent of the manganese ore shipped from Arkansas. The West-Central Arkansas district includes portions of Pulaski, Saline, Garland, Hot Spring, Montgomery, Pike, Howard, and Polk Counties.

The ores in the manganese deposits of the Batesville district are classified into 4 major types: manganiferous limestone, residual in situ clay, clay-talus residuum, and placer. Manganiferous limestone, mostly in the Early Mississippian St. Joe and Boone Formations, is the most abundant ore; but is usually low grade. Residual in situ clay and clay-talus residual ores are present as local deposits of irregular lumps, masses, and nodules, mainly in pockets of residual clay lying in depressions in the bedrock. These latter ore types are secondary residual minerals concentrated by the decomposition and replacement of some of the rocks of the Ferndale Limestone through Cason Shale (Ordovician) strata. Placer ores and deposits containing them are derived by the transportation of residual deposits and are usually mixed with sand and gravel.

History of Mining and Production

The Batesville district manganese deposits were mined intermittently from 1849 to the early 1880's by both open-pit and subsurface methods. From 1881 to 1959, mining activity was almost continuous. Major production occurred in both World Wars, but the highest single-year production was during 1956 when more than 29,000 tons of manganese ore were extracted. The U. S. Bureau of Mines has calculated that almost 200 million long tons of ore containing 4 to 9 percent manganese still remain in the district. Deposits of manganese ore may be difficult to evaluate because they are generally small, scattered, methods utilizing geophysical techniques are not usually economically feasible, and normal methods of obtaining representative samples are not effective.

The west-central Arkansas manganese deposits are mainly oxides in veins, open pockets, and cement that binds breccias together in fractured zones in the Arkansas Novaculite (Devonian/Mississippian) and the Stanley Shale (Mississippian). The manganese mineralization in ore deposits ranges in thickness from a fraction of an inch to about 10 feet. The deposits, which contain a large amount of low-phosphate manganese in the aggregate, are usually small and discontinuous. Exploration in the district is incomplete. A few mines and prospects are well known and minor production by both open-pit and subsurface methods was recorded in the first half of the 20th century, but the cost of mining, modest quantities and low grade of ore has so far precluded significant development of these resources. Phosphate-free manganese ores from the west-central district were utilized during World War II to upgrade the more phosphate-rich ores of the Batesville district.

There has been no manganese ore mined in Arkansas since federal stockpile programs were stopped in 1959. The potential for manganese ore production will depend primarily on the growth rate of steel production and the availability of manganese ore from foreign sources.